Karen and Beulah, two elephants with the Commerford Zoo, a Connecticut-based traveling animal facility, suffered for several years before their deaths in 2019, according to newly obtained records from the United States Department of Agriculture (USDA), the agency responsible for enforcing the Animal Welfare Act. The enforcement records show both elephants were forced to keep traveling and giving rides to children even when they were ill. Animals advocates say the reports reveal fundamental problems with how such businesses are regulated in the U.S.

Founded in the 1970s by Bob Commerford, the Connecticut-based zoo travels throughout the Northeast with the elephants and other exotic animals, including camels, ringtail lemurs, a kangaroo, and a zebra.

About 70 elephants are held in some of the 3,000 so-called roadside zoos around the U.S., according to Ben Williamson, the programs director at the nonprofit World Animal Protection U.S. These facilities have USDA licenses to exhibit animals, but none are accredited by the Association of Zoos and Aquariums, which mandates higher welfare standards and humane care for 241 institutions across the country. “Poor treatment of [captive] elephants in general is fairly common,” Williamson says.

Animals that travel for shows, such as the Commerford elephants, get some protection from the Animal Welfare Act. The act requires “adequate veterinary care” and humane transport but doesn’t specify that sick animals can’t be transported or used in events.

Karen, a 38-year-old African elephant sold to the zoo in 1984, died of kidney disease in March 2019, USDA records show. She was documented to have suffered kidney trouble since 2017. Beulah, a more than 50-year-old Asian elephant who had been giving rides, providing photo opportunities, and performing with the zoo since 1973, collapsed and died from blood poisoning caused by a uterine infection at a fair in Massachusetts in September 2019. She had uterine infections and suspected tumors for 10 years before her death, according to the records.

Poor treatment of [captive] elephants in general is fairly common.

An anonymous complaint filed with the USDA asserts that the day she died, Beulah collapsed three times and each time was made to stand up. The zoo said she collapsed twice and no one forced her to get back up, according to the records. Shortly before she died, an attendee at the fair photographed Beulah lying down in a grassy section of the parking lot. The zoo said this was not unusual behavior for Beulah.

The Commerford Zoo declined to comment. In a 2017 interview, zoo co-owner Tim Commerford told a local journalist, “I grew up with [the elephants] all my life. They’re family. The animal activists can say what they want about it, but they’re part of our family.” He said the elephants were in “perfect health” and were regularly checked by veterinarians.

It’s “shocking” that Karen and Beulah were forced to work when they were sick, even though both the USDA and the Commerford Zoo were aware of their illnesses, says Courtney Fern, director of government relations and campaigns for the Nonhuman Rights Project (NhRP), a Florida-based animal rights organization that obtained the USDA records in June. Starting in 2017, the NhRP advocated in court, unsuccessfully, for the zoo to release Beulah, Karen, and its third elephant, 49-year-old Minnie, who’s still alive, to a sanctuary.

At one of Karen’s last performances, Fern says, the elephant was bobbing her head and swaying—signs of distress—while children rode on her back. “Nothing was done to prevent [the elephants] from being taken to fairs and forced to engage in activities that are known to cause suffering,” she says.

Oversight of roadside zoos is insufficient, says Christopher Berry, managing attorney at the Animal Legal Defense Fund, an animal advocacy group. The USDA is “asleep at the wheel in terms of regulating these facilities,” he asserts.

The USDA not only has the authority to issue citations but also to suspend or revoke a zoo’s license to exhibit animals. The agency has cited the Commerford Zoo more than 50 times for Animal Welfare Act violations relating to its animals, including failing to have an attendant present during public contact with elephants, inadequate veterinary care, accumulated soiled hay, poor drainage in the elephant enclosure, and feces behind the elephant barn, according to the NhRP and animal rights group PETA. It has held 25 unannounced inspections since 2014, according to USDA spokesperson Andre Bell. “Inspectors tracked the health status of Beulah and Karen to ensure they were receiving adequate veterinary care,” he wrote in an email.

In 2019, U.S. Senator Richard Blumenthal, a Democrat from Connecticut, wrote a letter to Sonny Perdue, then secretary of the USDA, demanding an explanation for why Beulah and Karen had died, if their deaths could have been prevented, and why the Commerford Zoo continued passing USDA inspections after “the premature deaths” of the elephants.

“Licensees are required to be in compliance with the [Animal Welfare Act] in providing appropriate veterinary care for their animals,” Perdue responded in January 2020. “The Commerford Zoo provided documentation that Karen and Beulah were under veterinary care at the time of their deaths and that the care provided was appropriate.”

Nothing was done to prevent [the elephants] from being taken to fairs and forced to engage in activities that are known to cause suffering.

Berry, of the Animal Legal Defense Fund, says that state and county government agencies sometimes do better at protecting elephants than the Animal Welfare Act because state anti-cruelty laws are often stronger. In 2017, for example, animal control inspectors in Lawrence County, Alabama, found an elephant named Nosey chained, standing in her own feces without adequate food and water during a show. The Orlando-based Great American Family Circus had been licensed by the USDA for several years, despite the fact that Nosey was performing while suffering from a skin condition, which made her prone to painful infections, and had a history of exposure to tuberculosis. After local officials intervened, the USDA eventually revoked the circus owner’s license, and Nosey later was transferred to an elephant sanctuary in Tennessee.

Though the Animal Welfare Act requires adequate veterinary care, the guidelines are vaguely worded, and USDA inspectors often defer to the facility owners and veterinarians, Berry says. When a facility does violate the law, “there’s very little financial consequence,” he says. After multiple documented violations, the USDA may issue a warning or impose a small fine, usually ranging from between $2,000 and $15,000.

“Typically [the USDA] only imposes very minor fines after years of egregious Animal Welfare Act violations,” he says. A zoo may make the calculation that it makes financial sense to wait until a fine is imposed and pay it, “rather than actually paying for the veterinary care, or paying for upgraded facilities, and so forth to adequately care for the animal.”

“Laws are only as good as their enforcement,” Williamson says. A zoo with multiple USDA citations should expect to have its license revoked, but the agency rarely takes that step, he says.

“It shouldn’t take a Netflix docuseries to get bad animal actors’ licenses revoked,” he says, referring to the cases of Tiger King stars Jeff Lowe and Tim Stark, both of whom lost their licenses only after the show highlighted animal welfare concerns and advocates pushed for action.

Willamson supports the Animal Welfare Enforcement Improvement Act, recently introduced into Congress, which would require unannounced inspections before licenses are renewed and prevent licenses from being renewed if a facility has more than one documented instance of noncompliance.

The circumstances under which the USDA considers revoking an exhibitor’s license are “part of the deliberative process” and are therefore confidential, agency spokesman Bell wrote. “In general, [the agency] looks at the gravity of any violations that have taken place, a facility’s compliance history, the size of the business, and the facility’s good faith efforts to comply.” Bell declined to comment on whether the agency has considered revoking the Commerford Zoo’s license.

Minnie, the Commerford Zoo’s last surviving elephant, has been “languishing” alone since 2019, and her last public appearance was in July of that year, NhRP’s Fern says. Based on NhRP drone footage of the two elephant barns and the outdoor enclosure at the zoo’s Connecticut headquarters, Fern says, she believes Minnie spends most of her time indoors in a concrete stall. In previous statements, the zoo has described a “six-acre yard” where Minnie can spend her retirement.

It’s unclear why she isn’t appearing at shows, but Fern says that it could be because of public backlash against the use of performing elephants, especially after the deaths of Beulah and Karen. Minnie also has a history of injuring her handlers; she’s attacked zoo employees on at least four different occasions, according to press accounts collected by the animal rights group PETA.

The state of Minnie’s health is also unclear. Last summer, the family of Minnie’s former owners, Earl and Elizabeth Hammond, launched a GoFundMe for $2.4 million on behalf of the Commerford Zoo to raise funds for her food and general care. “COVID-19 has impoverished the farm that supports her,” the page reads, and Minnie “has been directly affected.” So far, the campaign has raised just $2,348.

The USDA doesn’t have the authority to seize Minnie simply because the zoo is suffering financially, Bell said. “The confiscation authority under the [Animal Welfare Act] is limited to animals that are in an unrelieved state of suffering. At this time, Minnie is not in a state of suffering,” he wrote.

That’s not how Fern sees it. “The more we learn about her situation, the more apparent the urgency for getting her to sanctuary is,” she says. The NhRP has offered to arrange and pay for Minnie’s move to a sanctuary, but, Fern says, their offers have been ignored.

“Minnie deserves freedom … Her entire life, they’ve exploited her for profit,” she says. “If they truly care about her like they claim they do, they should send her to a sanctuary where she can live as freely as possible with other elephants for however long she has left to live.” 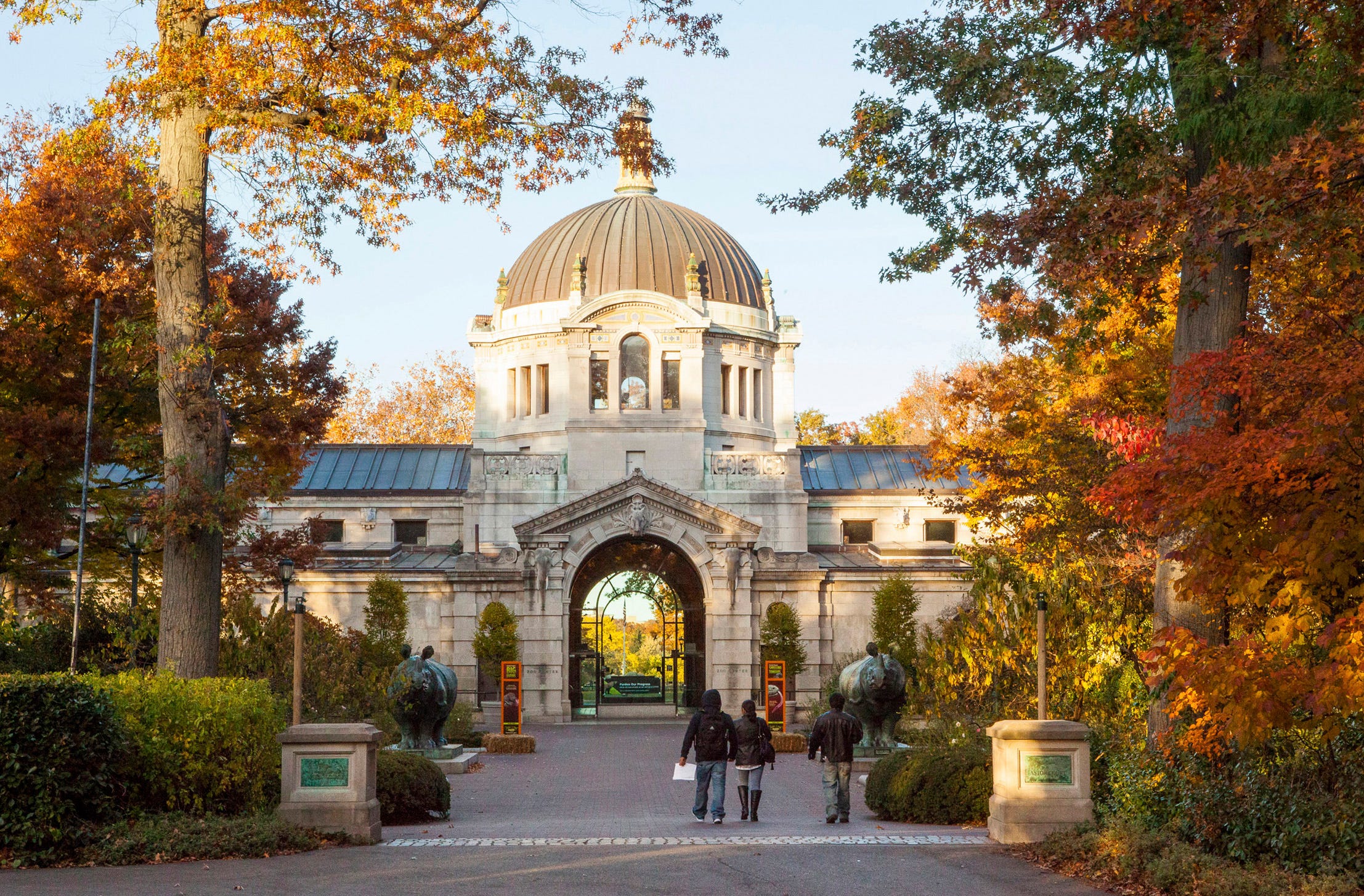